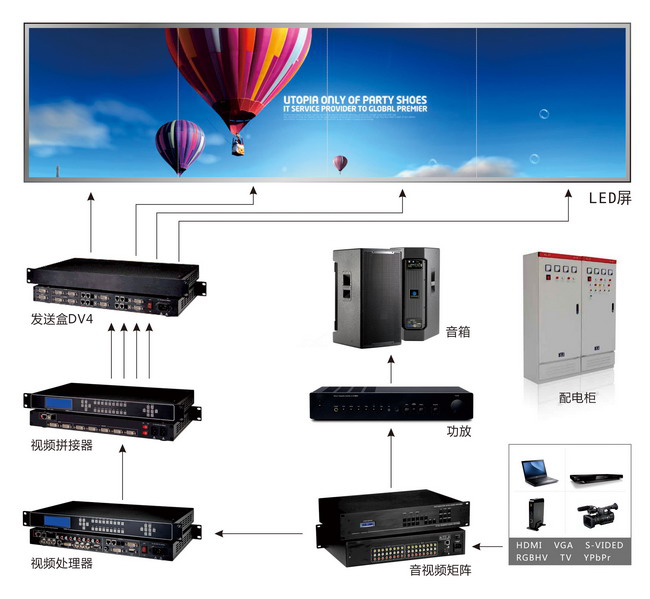 The function of the full color screen is to reproduce the graphics on the computer monitor using the principle of the tricolor principle. The three base colors of LED pixels have 1024 gray levels, so each pixel has the ability to combine 1677216 colors. The working mechanism of the screen is to directly map the pixels of the computer monitor screen to the pixel of the LED screen, and the mapping is done by hardware, without any software intermediary. For the use and operation of computer systems, this mapping is completely transparent.

The control line of the display screen receives the signal from the computer, which makes the LED lattice surface glow by driving the circuit. The display is made up of LED luminescent devices and control circuits, and the entire display consists of the same unit box, which will make the screen installation and maintenance more concise and convenient.

With the support of software system, a computer control screen, can be in real time to play on the computer screen is converted into digital signals, to the LED display screen display, so as to synchronously in LED display screen shot of the same picture, and complete the various processing and switching function to display content.

Video information can be displayed on the display screen, and video information is input via video peripherals, such as TV, VCD, DVD player, video recorder, camera, etc.

The information shown in this system is the control circuit transferred to the screen after the computer processing, and then displayed on the screen. Other computer peripherals, video peripherals and audio devices are connected to the input terminals of the computer so that the connection of the line is very clear and easy to install, use and maintain.

Due to display system equipment belong to the type transformer starting equipment, large starting current, so for larger screens, power distribution system are designed into several control circuits, to delay starting power and delay, to reduce the screen stop, when sending the impact on the grid.