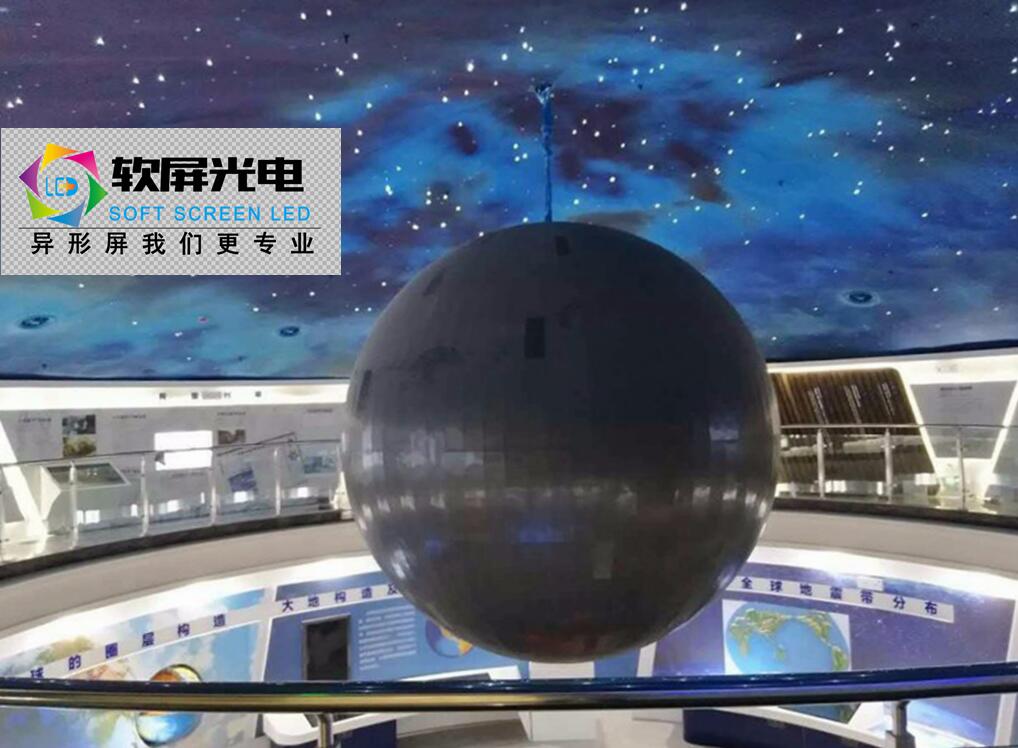 Nowadays, daily life ubiquitous popularity of conventional LED display has already caused the public aesthetic fatigue, in the era of the high-speed operation of personalized information, the user is an urgent need to innovation and bright spot. And conventional LED display products tend to homogeneity, the vicious competition intensifying also prompted some manufacturers have to find new breakthrough, display application of racking their brains to develop creative new products. Moreover, with the particularity of industry, site and display material, the method and form and shape of ordinary display are also put forward higher requirements. This is an update process of the fittest of a product and the inevitable result of the development of the industry.

As far as development is concerned, the demand for creative display in the fields of business, advertising and entertainment is also increasing year by year. Museum, science museum, etc, for example, has the culture venues, commercial complexes, landmarks, bar, recreation products through creative display mode is more needed to reflect the effect and visual perception. And, through the application and performance demand of different places, the design, manifestation and software of the appearance need to be targeted creatively. In recent years, there have been a number of classic examples of innovative LED displays in the industry, which also left a deep impression on us, even once proud. The show in front of people in the form of information media visual experience, more flexible interactive performance, according to different requirements according to the content of the information, a comprehensive breakthrough, satisfied with the user to the pursuit of information timeliness, comprehensiveness, transmissibility.

As the LED display of high-tech products, the iterative updating of technology is the main profit point and product highlight. LED display is limited by technology, and the LED display only has a single display information and image function. And with the progress of technology, especially the development of the manufacture process, product individuation, and improve control system of LED display technology, LED display, whether from the appearance and content have great breakthrough and development. Like the appearance of LED alien display, it is also the traditional idea that large screen splicing system can only be stitched together into rectangular shape. It can be freely spliced into various irregular shapes to display very creative content. Not only can the first time attract audience's eyeball, but also can expand the application scope of LED screen splice better.

In addition, the year 2016 has been called "the year of VR", and the title is certainly not just a groundless one. It's a statement Shared by professionals in the global tech community. The popularity of VR/AR has also accelerated the multi-dimensional application of LED display technology. There are also a number of industry veterans exposed, interested in VR and AR, and have been making such technical reserves. When the technical reserve reaches a certain level, it is more practical, if it can solve the user's actual problems, it will be mass-produced and then widely promoted to the market." Intelligent interaction is the current mainstream word. VR and AR technology will perfect the "human screen interaction", which is not only a challenge but also an opportunity for industry development. In addition, the naked eye 3D technology is also abundant, or has changed the display of LED display earlier. Holographic projection technology has also been applied to various fields of life. Not only can it produce three-dimensional air illusions, but it can also make the illusion interact with the performers and complete the performance together to produce a stunning performance effect. It is also very likely to become an important segment of the LED creative display.

Of course, from the Angle of consumers and the public, the traditional LED display, square founder, most still is given priority to with rectangle, in appearance has not a lot of new idea, the public seems to have to this kind of display mode produced severe fatigue. This is obviously not a match for the era of high informationization and digitization. However, LED displays, especially outdoor LED display screens, play a crucial role in information dissemination and display functions. Therefore, how to become an industry leader in the "human beings" is an irresistible development mission of LED display enterprises. Therefore, the creative display of market development came into being. More commercial display and industry designers have also begun to incorporate creative display into the design concept, which will also lead LED display to the wider and higher-end market applications.

It is reported that the United States advertising master Leo boehner said: "I'm convinced that the excellent creative work, is always a successful agency wheel axis, the past is that now is, as is the future." Creativity is not only an inevitable product of technological upgrading, but also meets the needs of the present era. Now, there are more and more enterprises focus on creative display area, had made some in the industry enterprise is not in the minority, such as one product photoelectric LED transparent screen in each big star concert, Ming hing blossomed, indoor light clouds abnormity screen for the first time, Kang Shuo show originality spherical screen has broken the traditional form of change, the eye of the bud of sina abnormity transparent LED screen project vocal... It can be seen that the enterprise has already "opened up the land" in various fields, which also means that the creative display market business opportunities are enormous.

And, according to relevant research data, China's strategic emerging industries will increase their share of GDP from 8% of GDP in 2015 to 15% by 2020. The digital creative industry will be one of the five new pillar industries with a value of 10 trillion yuan. In the face of such a huge market, creative display, as an important part of its communication, will surely usher in a more rapid development in the future. Compared with traditional regular screen, creative display is now a relatively "small" market, but as the industry increasingly perfect the relevant industrial policies, domestic digital creative industry also will usher in a broad market space.

With the development of LED display industry, the battle between the big enterprises seems to have gone far beyond the products and the market. More focus on the solution of optimization, the industrial chain upstream and downstream coordination, service upgrade, the accumulation of enterprise brand construction and other aspects of the intangible assets, this is also an integral part of the competition is an important part of the need to be kept increasing. Therefore, the development of subdivision is an inevitable development trend, and the creative display will undoubtedly open another blue ocean market.